Made in a sake brewery where the Beatles' masterpiece "Michelle" is played.
Tsuyoshi Domoto presented Koichi Domoto as a birthday present at the Kinki Kids concert in 2017.
At that time, it became a hot topic in Japan social media and sold out in a blink of an eye.
It has a fruity taste with 9% alcohol, so it is very popular among sake amateurs. A winter limited edition popular item in Japan. Beau Michelle’s NIgori is produced only twice a year in summer and winter.The sediments at the bottom of the bottle, like a deep layer of snow.

After gently shaking, it emits bursts of citrus-like refreshing fragrance. The taste is smooth as powder snow, sparkles with some fine light bubbles . The sweetness of Tangerine's melts into the tip of the tongue, and then the swelling scent is poured into it, and it blends with the light acidity, and is in harmony with each other.

"Raw sake" is also recognized as the freshest Japanese sake. The Home of Beau Michelle, NAGANO
“Sake is the Gift from the Unique Natural Environment of Nagano Prefecture.”

Surrounded by high mountains, known as “Japan Alps'', Nagano is also regarded as “the roof of Japan”.

In fact, Nagano Prefecture is the area with the highest altitude in Japan. With the average elevation reaching 1,000 m, the water is beautiful, the diurnal temperature variation is huge and the winter is cold, so it provides an ideal environment for agriculture.

Nagano prefecture is well known for it's beautiful nature. The air is clear and natural spring water flows from the mountains. Summer is dry and refreshing, but winter is very cold on the other hand. Sake Rice from NAGANO
“A good sake is the joint work of breweries & local farmers.”

There are no shortcuts or magic that you can make high quality sake without quality rice.

Nagano Prefecture is famous for its beautiful natural scenery. In fact, Nagano Prefecture is the highest elevation area in Japan.The air is fresh, the sunshine time is long, although the rainfall is relatively low, the natural spring water flowing from the mountain is abundant. The summer is dry and refreshing, but the winter is freezing. The above climatic characteristics provide an ideal environment for agriculture.

Tomono Shuzo mainly use "Miyama Nishiki" and "Hitogokochi" for sake producing, which are mainly harvested in Nagano Prefecture. Especially, they are obsessed with the special sake rice "Hitogokochi".

"Hitogokochi" was bred by Nagano Agricultural Experiment Station from 1987. Its name means comfort and peace of mind. The discovery rate of "Shimpaku" is 76.5% (v.s. 31.6% of "Mishanjin"), and many brewers think it may be more suitable for brewing. More and more sake breweries are now using "Hitogokochi" to produce a premium sake. In addition to sake rice, water also has a great influence on the quality of sake.

Nagano Prefecture is the prefecture with the highest mountains in Japan. The prefecture is surrounded by the Hida Mountains (Northern Alps), Kizuna Mountains (Central Alps), and Akaishi Mountains (Southern Alps). The water that flows down from these three mountains  has been lurking under the ground for many years and then slowly gushes out of the ground, providing each sake brewery with a clear water source. Therefore, the crystal clear sake quality is derived from the clear water quality of Nagano Prefecture.

Tomono Sake Brewery is located in Saku City, Nagano Prefecture, a blessed plateau city.
The alpine snowmelt is naturally filtered to form soft water which is used to produce “Beau Michelle”. The sake made with soft water (low mineral content) has a soft and mellow taste. This also constitutes the basic characteristic of Beau Michelle. TOMONO SAKE BREWERY
To produce the Nihonsu only avaliable bere

Benefiting from the clear air and the abundant water resources from melting snow from the mountains, the severely cold winters and dry summers, Saku City is a richly endowed place to produce sake.

The brewery was refurbished in 2007, and Haruka, a younger sister of the family joined the brewing team afterwards. This makes people look forward to the future of the energetic Tomono brewery centered on them.

With unremitting efforts to improve the quality of sake, their products have further developed a refreshing, elegant and gentle exquisite taste, and the outline of the taste has become more tidy, which makes it stand out among the many sake breweries.

While pursuing the brewing of delicious sake, Sake Brewery also does not forget its mission to improve and promote the local sake culture. They insist on using only rice produced in Nagano, hoping to preserve the local sake and agricultural culture, brewing peace of mind and relaxing sake, and becoming a sake brewery that shares joy and happiness with customers. The "Beau Michelle" series is a unique Japanese sake that The Beatles masterpiece “Michelle” is played during the fermentation process.

The series is 100% brewed with ひとごこち (Hitogokochi) rice from Nagano Prefecture, and its beautiful taste is reminiscent of pure spring water. Moderate umami is a taste that further enhances the deliciousness of sake during meals.

It has a mild and ripe fruit-like aroma, with a slight consistency on the palate. Since the alcohol concentration is lower than that of ordinary Japanese sake, the flavor is soft and the sweetness and sourness are condensed. Therefore, it is not limited to Japanese sake, and it can be consumed by light drinkers.

-Bring a smile to everyone

Like Ginjo sake, it starts with carefully polished rice and is brewed using rigorous preparation methods.

More importantly, let the fermented mash listen to music, so that the taste becomes mellow.

Please enjoy it as a new way to get started with sake. 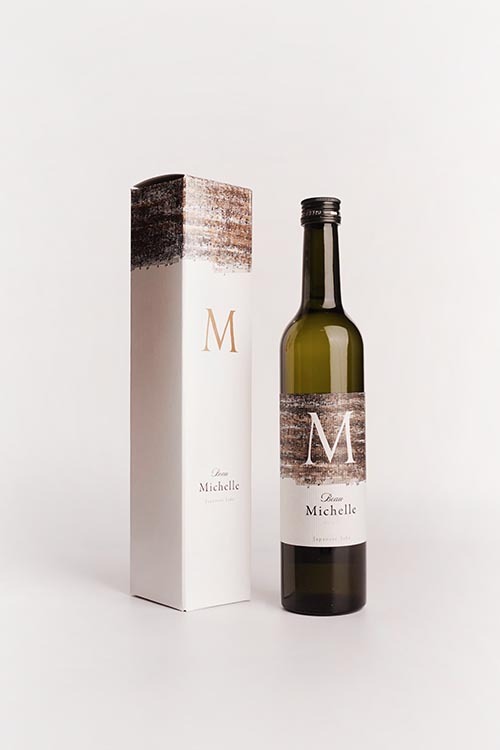 Get Buzzed, Seized the day!